As with all of the stories that I share, I fictionalize them enough to conceal the identities of the companies, leaders and their employees.

Jack described his not-for-profit organization to me with pride. He had been at that branch for a year and had come to know the employees as well-educated, dedicated people. Despite this, a debilitating problem undermined the workplace. The employees could not do their jobs effectively and so their cause was negatively affected.

“Corry, there are days when there are so many complaints coming through my office that I swear, I don’t get any work done!” Jack said, then he went on, parroting some common things he hears “Jack! You have to do something about her! I can’t work like this!” and “Jack, got a minute? I have to talk to you about what he just said to me!”  His voice revealing that after only a year in his role, he was totally fed up.

Jack’s assessment was that many years of misunderstandings, day to day conflict, and personality clashes had accumulated to the point where people disliked and distrusted each other so much that they now refused to collaborate, even with their own team members.

This is how the hornet nest grows.

Those familiar with the terrain develop a subconscious knowledge of where the danger lurks. It’s not always something that can directly be pointed out, just an instinct for whom to avoid, where to tread lightly. There’s an ever-present hum to which many have turned a deaf ear. The constant buzzing is ignored with the hope that it will eventually go away on its own. Yet the nest grows is always ready to swarm and always does when it is disturbed.

Jack and I designed a series of coaching workshops to bring everyone together on a regular basis so that they could co-create a better culture of their own making.

From the beginning of the mandate, resistance was strong, especially from the most frequent complainers. I fielded complaints from the participants about the icebreaker activities, the dialogue exercises, and the workshop format.

“I’m sorry Corry,” Jack said to me the morning after the third workshop and yet another round of complaints from the usual suspects. “I have to pull the plug on this project. I can’t force them to participate and they are refusing to come back. If I don’t have all of them in the room, then it defeats the purpose of co-creating a better culture.”  He looked at me, his anger and frustration now at a tipping point “but believe me, no more Mr. Nice Guy. I tried the nice way and it didn’t work.  Now I lay down the law and they are not going to like it. They are going to grow up or get out.”

As the weeks that passed after that conversation, I reflected on the program to figure out if we could have done things differently to complete the project with the desired outcome.

What I slowly came to understand was that their nest was threatened. Jack and I were asking people to take part in building something better which meant they had to let go of a past that they were passionate about despising. They would have had to let go of hurts and angers that had become a part of their very identity. By letting go of their way of being, they in some way were betraying something that was true for them. 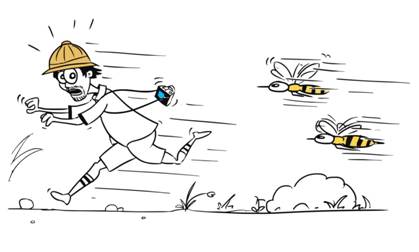 I commend Jack and all the leaders like him who take on the nest. I honour the people who are suffering but afraid to change. Leaders must approach change with confidence and purpose, undaunted by the fear of upsetting the hornet nest. They must stay the course until the inevitable fury has calmed, which it will.

The importance of employee engagement, why it is missing from many companies and how to achieve it are issues that I have been observing for most of my career.  Writing about my years of practice, fact-finding missions and observation, I am now very pleased to share my latest blog series on employee engagement, what it means and how to achieve it.

Part 2: Why Work Is Not Working

Part 4: The Path to Performance and the Case for Coaching Culture

Part 5: The Portal to Success: The Executive Mastermind Alliance

Reach out to your executive coach to help you be the leader you need to be to build the workforce who will achieve your company goals. If you don’t have a coach visit The International Coach Federation’s database of coaches to search for one, or, book a call with me and it will be my pleasure to speak with you. See my real-time availability here and reserve time with me: http://www.calendly.com/corry-1